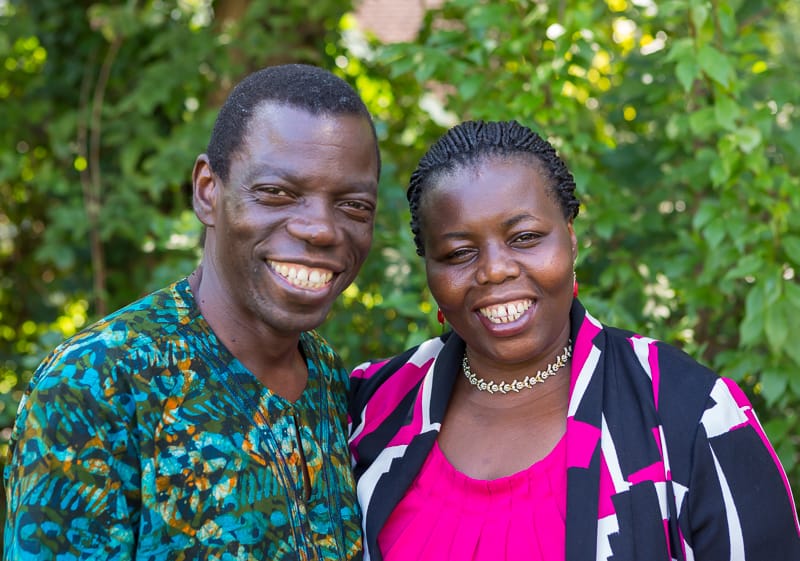 John grew up in the village of Bumwalukani, in the current day Bududa district of Uganda, one of eight children. Unlike most parents there, John’s father, who had a ninth grade education, knew how to read. He collected books and encouraged his children to listen to the radio and learn about the larger world. His father taught him and his siblings the value of an education.

Every morning John and his siblings awoke at 4 a.m. to work in the fields and then headed to school at 7 a.m. Sometimes the headmaster there turned them away publicly because they didn’t have money for their school fees, but John's father kept telling him and his siblings to go back. After finishing chores in the evening, the family usually read books around a kerosene candle. Whenever one of the Wanda children came first in their class, the whole family celebrated with treats, such as bread from 30 miles away and a cooked chicken for dinner. These were major incentives, and John learned to hope and dream for more.

After John completed primary school, he went to a secondary boarding school 30 miles away, as his older brothers had done. Carrying their suitcases on their heads, John and his siblings would walk this distance through treacherous forests that held wild animals and armed bandits every beginning of school term, and then back home at the end of the term because they had no money for transportation. But they were determined never to give up. John focused on his studies while his father sold land, produce, and sometimes even their own furniture to pay his sons’ school fees. John never wanted to disappoint his unselfish father.

After successfully finishing secondary school, John was admitted to a free, government-run university and earned an accounting degree there. (One of his older brothers earned a law degree.). After a few years of work in Uganda and further studies in South Africa, John eventually found his way to America where he settled with his wife, Joyce.

Looking back, John feels like “a guiding hand led me through all the upheavals of my childhood.” He and Joyce have sought to help village children follow in their footsteps and also to make those steps easier to take. REACH aspires to be a guiding hand to scores of eager, young learners from John’s village and beyond.

One of eight children born to the Butala family in Butinduyi village in Uganda, Joyce Wanda had few strong options for primary education locally. Her parents believed so deeply in educating her, though, that they eventually sent her away to boarding school in fourth grade. Joyce worked hard and did so well that she was admitted to one of the best secondary schools in the region. Her strong faith in God also helped her stay focused and feel supported through the challenging times.

While some people saw her as “the pride of the village,” other locals viewed educating a girl and selling land for that purposed as a “waste of resources.” Joyce’s parents, though, always believed that her education was as important as her brother’s. (He was in secondary school, too.) Most girls in Joyce’s village married young or got pregnant and dropped out of school. Always believing in Joyce, her parents sold produce, land, cows and anything they could to pay for her school fees, without ever complaining. Joyce knew she had their full support and that gave her the freedom to focus on her academics.

Continuing her studies and successes, Joyce eventually went to a school over 100 miles away (a day’s travel) from her home village and rarely got to go home. Still, Joyce was a source of inspiration as the first girl from the village to reach high school. Other families and girls in the village saw new possibilities for their own future. When not at school, Joyce lived closer to school with an aunt in Jinja town before moving to Kampala to study marketing at the free university there. Her dad visited when he could, and her siblings were her biggest cheerleaders.