By Amy White, REACH Board Member 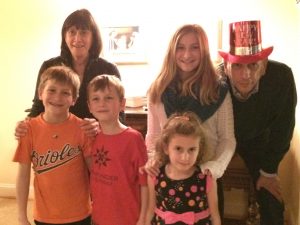 Elissa & Steven Director with their grandchildren

When their daughter, Syril Pettit, an REACH Board Member, provided them with a proposal and a specific list of needs for the Bupoto Clinic in Uganda, Elissa and Steven Director decided to take their REACH giving to the next level.

The Directors, who live in Seattle but “shuttle back and forth between coasts and grandchildren,” were impressed by the fact that their dollars could have such a strong impact at the clinic. The couple acknowledges that there are lots of worthy causes in the world, and that sometimes it’s tough to decide whom to support.

“One of things we’ve always been concerned about when donating is how to find organizations that would use your donation as effectively as possible,” says Steven Director. They’ve found that with some causes too much of a donation goes to overhead, or it’s not clear to them exactly what their donation funds. They also felt like their own dollars were having only a “marginal” impact when they gave to some of the larger, global charitable organizations.

“Through Syril and her knowledge of the board members and the founders, we felt that REACH was an organization that we could be confident would use the funds effectively,” says Steven.

When Syril presented her idea to them, the Directors also received a list of the specific needs of the Bupoto Clinic — ranging from a centrifuge that will be used for serum preparation and lab tests to a weighing scale for infants. The Directors generously donated $9,500 to fund all the clinic’s laboratory needs and also local outreach programs. In recognition, the lab at the clinic will now be known as the Director Family Lab. 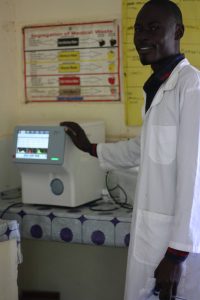 Our Bupoto lab technician, David, with a blood grouping machine funded by the Directors’ gift

Previously, the Directors had given directly to REACH’s school programs. However, they believe that good healthcare is also essential to learning. “The clinic will complement the educational programs,” says Elissa Director. “If everyone is healthier, they can perform better in school.”

The Directors were particularly impressed by the knowledge “that these items – specific medicine and equipment — would have an immediate impact and be put to use right away,” says Elissa. In short, they could transform their dollars into visible change and action.

Their daughter, Syril, first became involved through Tuckahoe Elementary’s annual 5 K Global Strides race. Through the efforts of Syril, Principal Mitch Pascal, and many others, Tuckahoe Elementary in Arlington, Va., is now a sister school to Matuwa Primary School in the Manafwa district of Uganda. Through REACH, Tuckahoe has helped to build a kitchen at the school, repair cracked floors and broken windows, supported their lunch program and opened a library there. The Director’s grandson, Torin, also shares the REACH story and asks for donations at a local farmers market.

So, all in all, supporting the mission of REACH has become an intergenerational family project. REACH gives thanks for the generous support of the Director and Pettit families!

Click here to join the Directors’ by supporting our health clinics and programs.