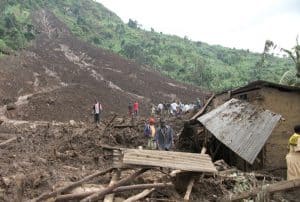 The response to our emergency plea for help for victims of the Bududa landslide has been truly amazing.  In less than one week, REACH has received more than $13,000! The REACH Board and staff are grateful beyond words for the generosity of our donors and the sincere expressions of concern for those affected by this tragedy.  Thank you from the bottom of our hearts.

More than 400 people died in the landslide which hit on March 1st and affected four villages located about three miles from the REACH primary school.  The government is urging approximately 10,000 people to relocate due to threats of additional landslides and continued heavy rains.  Two temporary camps for displaced persons have been set up within a 40-minute hike of REACH.  All REACH students are safe and accounted for and the REACH school building and other facilities are not under threat.  Thankfully no immediate family members of REACH students or staff were lost in the landslide as originally feared but our children did lose extended family members and neighbors and the entire community is shaken. The REACH Executive Committee met on Sunday, March 7th at the home of John and Joyce Wanda and agreed upon several immediate actions: 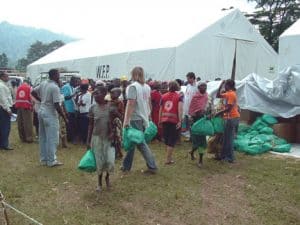 The REACH Emergency Response Task Force is being led by REACH Program Director James Nabitawo.  James traveled to the site of the landslide on Monday and on Tuesday and Wednesday, he and other task force members – REACH Volunteer Coordinator Carolyn Edlebeck, REACH Teacher Patrick Wasswa and REACH PTA member Michael Wanditi — traveled to the temporary camps where they met with representative of the Red Cross, Save the Children and other relief agencies.  Carolyn reports, “there is plenty of food and basic need supplies for the time being.”  Currently, the government and major NGO’s have committed to providing food and temporary shelter for 3-4 months.  Children, as you can imagine, are especially vulnerable at this time.  Carolyn noted, “Many children were wandering around lost and crying.” Temporary classrooms are being constructed by Save the Children and are expected to open on Monday. REACH is coordinating on the ground to support this effort and fill urgent gaps and ease some of the immediate feelings of helplessness that children are experiencing.
First and foremost, we want to make sure that those children most in need are the ones getting help.  Unfortunately there are people who were not impacted by the landslide coming into the camps because they have heard food and supplies are being distributed.  One idea is to provide a set of clothing of a uniform look and color for all the children in the camps. 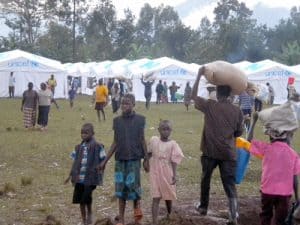 Most children are in need of clothing as they have nothing more than what they’re wearing and a uniform would help identify the children who belong in the camp and should be receiving emergency services.  REACH will give priority to ensuring there are enough teachers and supplies on hand to support the educational programs in the camps.

Our staff is also evaluating whether there is adequate means to prepare food for meals for the children who will attend the temporary classrooms.  We also want to look at other ways we can help children with the psycho-social issues they’re experiencing and are considering the provision of recreational activities and supplies. In addition to direct emergency response services, REACH is providing housing to relief workers who are descending on the region from across Uganda.

The Red Cross has called for Peace Corps Volunteers to donate one or two weeks of time to help in the temporary camps that are being set up for displaced villagers.  Peace Corps Volunteers and staff members from SOS Children’s Villages are currently staying at the REACH guesthouse and are appreciative for a great place to stay in a nearby location. We’re grateful to these volunteers as well as to the REACH staff members on the ground, who are working nearly round the clock and who have shown exemplary dedication to doing everything they possibly can to help the victims of this tragedy. Thank you again to all the REACH supporters who have contributed to the REACH emergency response in Bududa.

Your generosity, concern and commitment at this critical time are making a tremendous difference. We will continue to keep you informed of our progress through the REACH blog, email newsletter and other communications. To make a donation to the REACH Emergency Fund, please give online or mail a check payable to REACH at PO Box 7694; Arlington, VA  22207. Write “Bududa Landslide Relief” on the memo line. Thank you! Jennifer Paul REACH Executive Director